nudge gently, but wake her now

My pieces explore the complications and possibilities of communication at the borders of the human and machine. This liminal space allows me to draw upon hidden, alien, xeno sonic material.

Where were they when the noise started (2018) and nudge gently, but wake her now (2018) are two pieces from a new untitled suite that use the “Harvard Sentences” as their source text. The Harvard Sentences were constructed for psychoacoustic experiments in the 1960s, specifically to test new telecommunications systems. The sentences have the same distribution of sounds in them as those found in standard spoken American English. They’re still used today, to not only help improve the quality of digital and satellite telephone systems, but also by transgender women who choose to train their voice to speak at a higher pitch.

Typical for the time, the sentences contain rather outdated and misogynistic views of women, and there’s a strange irony that trans women use them to work to feminize their voice. In nudge gently, but wake her now, I’ve taken the sentences that involve descriptions of women and rewritten them to tell a more powerful, utopian story in concert with some of the exercises used to train the trans-voice. In Where were they when the noise started, I take a wider selection of the sentences and reorder them to narrate the moment when the current unequal world falls away and new possibilities of exodus and potential present themselves. In both pieces I pull from the occult possibilities of the Harvard Sentences to explore alien futurities that offer a trajectory away from our present unsettled moment.

nudge gently, but wake her now.pdf 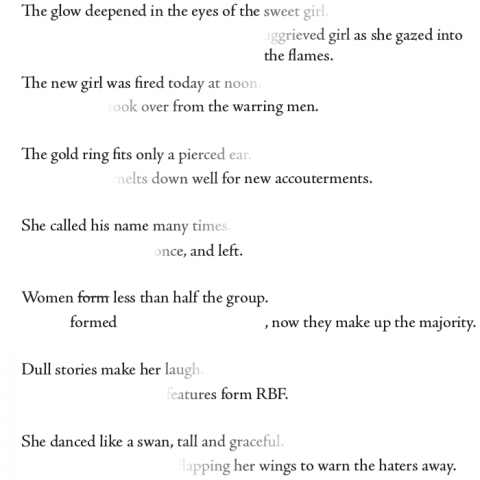